Beer crisis: how we discovered climate change could cause a global barley shortage

The price of beer could double under unchecked climate change, as droughts and extreme temperatures cause barley yields to drop. That’s one conclusion of research we recently published in Nature Plants.

We first became curious about barley, and the beer it produces, as this relatively minor crop was clearly affected by climate extremes yet had never caught the attention of climate scientists. And, unlike many other food crops, barley grown for beer is required to meet very specific quality parameters. Malted barley gives beer much of its flavour, yet if it is too hot or there isn’t enough water during critical growing stages, the malt cannot be extracted.

This is why we gathered a team of scientists based in China, the UK and the US to assess what extreme drought and heat events may mean for beer supplies and prices. We were interested specifically in what would happen to barley when there was both extreme drought and heat during the growing season, something that will become more common thanks to global warming. We then modelled what this would mean for barley yields in 34 world regions which either produce or drink a lot of beer.

In more optimistic scenarios, where emissions are brought under control and warming is kept at a manageable level (what climate scientists refer to as RCP2.6), droughts and heatwaves might occur together in about 4% of the years. In the worst case scenario, where emissions and temperatures keep increasing, such extremes might occur in 31% of the years.

These are global average results, however, which can hide significant regional variation. In affected years, barley yields would drop the most in tropical areas of Central and South America, and in Central Africa, for instance. In the same years, yields in temperate Europe would decrease moderately, or even increase in parts of the US or Russia.

But the overall trend is clear: at a global level, barley yields will at best – under the optimistic scenario – decrease by 3%. And in the worst case scenario, yields will fall 17%.

The ‘worst case’ scenario would be devastating for barley. Xie et al/Nature Plants

From barley to beer

We know that climate change will mean less barley – but what about beer? One factor to consider is that barley is mostly used to feed livestock, and beer is ultimately more dispensable than meat. This means declining yields will hit beer production extra hard.

Again, price and consumption changes would vary widely from country to country, with the greatest price increases being concentrated in relatively affluent and historically beer-loving countries. In Ireland, for example, the price of a beer bottle would double under extreme climate change. In less wealthy countries, people would simply drink less beer under those circumstances. We predict a 32% drop in Argentina, for example. 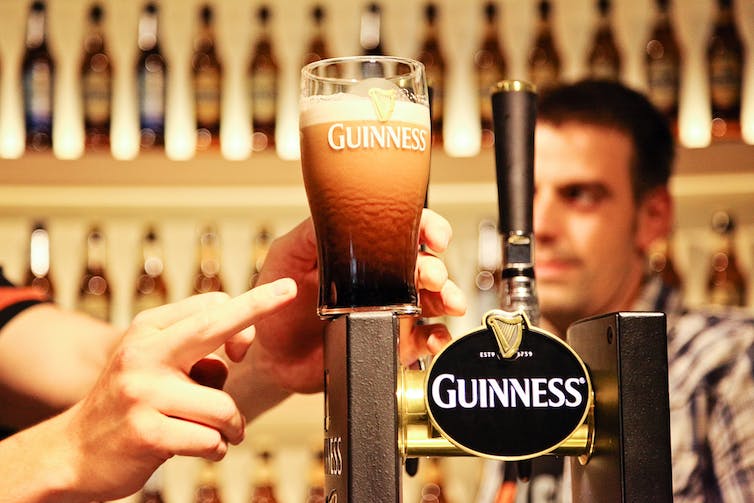 It is possible that more drought- or heat-tolerant barley cultivars may be developed in future, which would reduce the risk of climate change to supplies of beer. But these and other technological developments, or increases in stockpiling (or even prioritising beer over livestock), were beyond the scope of our study.

While previous research has looked in detail at what climate change means for essentials like wheat or rice, less attention has been paid to so-called “luxury goods”. In our study, we took beer as one such example, to highlight the ways climate change will affect our lives.

We hope our results might attract further attention from various beer-lovers who actually have the power to do something about global warming. Seeing that climate change is affecting our lives in more ways than we imagined before, they might start to think about further strengthening global efforts to reduce emissions.

This article is republished from The Conversation under a Creative Commons license. Read the original article.

The study published in the journal Nature Climate Change shows that daily emissions decreased by 17% – or 17 million tonnes of carbon dioxide – globally during the peak of the confinement measures in early April compared to mean daily levels in 2019, dropping to levels last observed in 2006.

Video: Interview with Glen Peters on COVID and global emissions

Here is a video interview with Glen Peters, Research Director of CICERO, on the impacts of COVID19 on global emissions.

A GIF of CO2 global emissions from January to May.